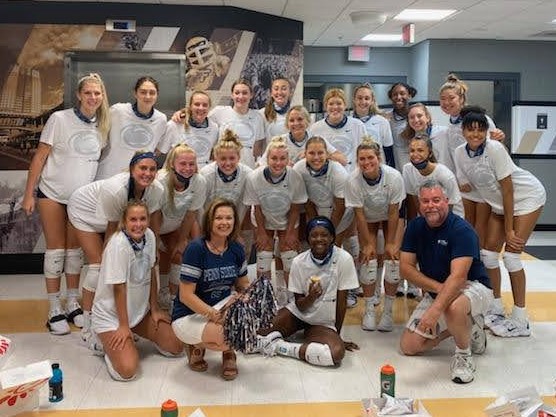 Our #12 ranked Penn State Women’s Volleyball team arrived in Orlando on Thursday, August 26 to open their 2021 season at the UCF Challenge. When they arrived, they were welcomed with special Chick-Fil-A dinner from your Central Florida Chapter to provide a little “WE ARE” spirit in their home away from home!

A special THANK YOU goes out to Frank Raike (membership chair and chapter trustee) and Jessica Aslanian who helped serve dinner to our Lady Lions.

Images of PSU Volleyball from the UCF Challenge
Our Nittany Lions took to the court Friday morning against #24 Georgia Tech to start off the 2021 campaign. Penn State dropped the first two sets (25-20, 25-16), but surged back in the third set winning 25-17. The Yellow Jackets would not be denied in the 4th set (25-19) giving the Nittany Lions their first loss of the season in a 3-1 finish. In the 4pm match-up against the St. John’s, Penn State returned to form sweeping the Red Storm three sets to none (25-14, 25-22, 25-9) finishing in dominating fashion.

The Lions were off the next 24 hours and met the three-time AAC champions in the night cap. Before a capacity crowd, many of which were local and visiting Penn State fans, the Nittany Lions took the first set 27-25 in a very competitive first set, and PSU didn’t look back. Penn State took sets two and three (25-21, 25-19) to improve their record to 2-1. As part of the large number of Penn Staters in attendance, many came to watch locals including setter Emily Oerther (Windermere, FL), outside hitter Annie Care Fitzpatrick (Ocala, FL) and defensive specialist Jenna Hampton (Tampa, FL). Each player stepped on the floor and was welcomed by an added roar from the family and the Nittany Lion faithful. Although almost 1000 miles from Happy Valley and in a visiting smaller venue, the matches had the energy of Rec Hall with traditional standing up and synchronized clapping to boost our squad. Penn State returns home for the Penn State Classic as the meet Iowa State on Friday, September 3rd.